The time I’ve put into the project this week so far has been mostly about logistics and planning for the recording and not so much working with the music. Perhaps not the most fun week… However, something that was fun was that I did a little work on the guitar-learning-tool I mentioned in the last post. So I thought to write a few words about what I’m talking about in this post:

The motivation for making this app basically came from the never-ending practice of getting to know the fretboard of the guitar better. Without going into to much music-theory or details, get-a-grip simply aims to visualize where intervals appear on the neck in relation to any given key-note. In the screenshot above, the 1th (root), 3 (third) and b7 (minor seven) intervals are shown for the key of Eb on a regular guitar. As you might guess, you can show any single interval, chord or scale of choice by checking the interval boxes.

At this point, the prototype is all about showing where the intervals, relating to a key-note is. However I mean to add/expose more features. In particular it would be nice to make it useful for beginners whos first priority isn’t knowing where all the flat nines in F# lies on the fretboard. Some features exists already though that isn’t showing above… For instance it works also for other string instruments and tunings. Below visualizes the chord A major on the Ukelele with the tuning GCEA.

Basically it should work for any string instrument based on half tone steps (semitones). This implies that it does not work well for things like the Turkish instrument “Baglama”, but unless you play that, you should be good to go :). For example, who doesn’t want to visualize the super locrian scale on a 17-string bass!! (see below) 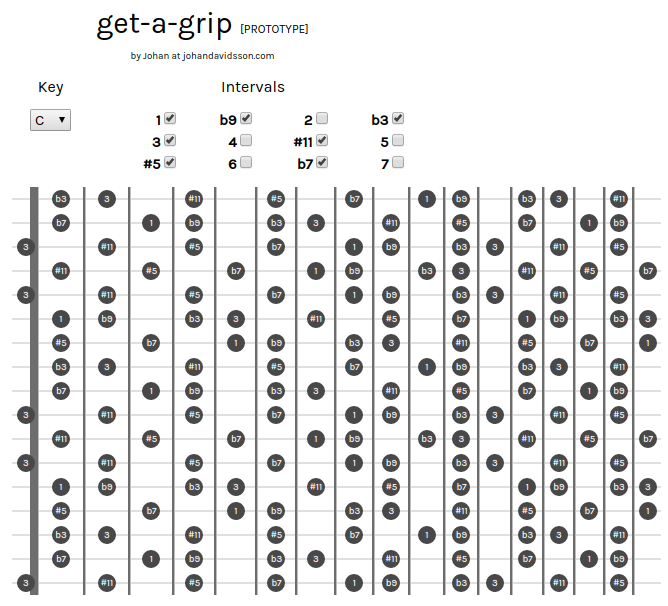 No but seriously, I think this could be and become as it evolves, a useful tool for string instrumentalist to use themselves or by teachers. At least I hope it to be =). Of course there exists tons of tools out there already but I couldn’t find one that have the interactive part, maintaining the commonality of string instruments and the focus on intervals. If you are curious to try the prototype yourself, you can go and get-a-grip here.

So that’s the first prototype. I think soon I will make a first version of it available somewhere. I’ll probably continue to mention this app here now and again when I make progress with it as it’s kind of fun. Anyway, hope you liked the idea! It would be fun and appreciated to know your input on it so feel free to say what you think! Now I need to go back to making music.

Until next time /Johan